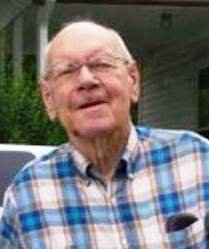 William Henry Ortmann, 92, was called home to Heaven on Monday, November 4, 2019 where his beloved Barbara welcomed him with open arms.

The only child of William and Ida (Light) Ortmann was born on August 5, 1927 in South Bend, Indiana.

After graduating from high school Bill enlisted and served his country proudly with the United States Army Corps, earning his Corporal ranking and serving in Okinawa.

With great joy, Bill wed the love of his life, Barbara Jean Robbins in Niles, Michigan on January 30, 1946.  God blessed them with 73 years of marriage before Barbara was called home to heaven.

Bill served on the board at the Jerry Tyler airport and always enjoyed the Osh Kosh airplane shows.  He began fighting fires for the Niles City fire department in 1958 and retired in 1982.  He spent countless hours working on his Model A, but Bill’s passion was serving God; he served at Coulter’s Chapel in many capacities for over fifty years but many will fondly remember him and Barbara playing the guitar.  He was a man with a kind and gentle spirit, full of wisdom and always an encouraging word.  He was often seen with a smile upon his face, especially when someone served him a piece of pie!

He is preceded by his parents, William and Ida Ortmann and his wife Barbara Ortmann.

Memories of Bill can be shared with his family at www.BrownFuneralHomeNiles.com

Arrangements have been entrusted to Brown Funeral Home & Cremation Services.

Share Your Memory of
William
Upload Your Memory View All Memories
Be the first to upload a memory!
Share A Memory
Plant a Tree