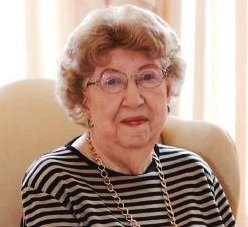 Betty Rose Miller, 91, turned her face to the light and closed her eyes for the final time on Monday, October 7, 2019. We, her family, are left to remember her amazingly blessed life.

Born in Elkhart during the giddy year before the stock market crash that brought about the Great Depression, Betty was the second of four children and the oldest girl. In 1931 her parents had to pack up their belongings and head to Kansas for a year or so to help on the family farm where little Betty, aged 3, became the favorite target of the farmyard chickens, leaving her with a lifelong wariness of birds.

After returning to Niles, MI, Betty excelled in school, graduating in 1946 as Niles High School valedictorian. Betty was always self-reliant and optimistic. She often said that she built happiness within herself and carried it with her wherever she went.

Betty never had difficulty finding a job; they came to her unexpectedly and out of the blue. In the same way her life partner, Richard Miller, appeared in her life out of the blue. He was nine years older and a handsome former 1st Sergeant in the Army Air Corp. during WWII. While her parents initially warned her away from an older military man, upon meeting the quiet, honorable and steady Richard, they consented to the match. Betty was endlessly practical and thrifty so in April of 1947 she was married in an attractive business suit that would also be suitable for her work at an insurance agency.

When Richard was called to serve again during the Korean War, this time as a Master Sergeant based stateside in Tacoma, Washington, Betty was able to join him along with their first daughter.

For many decades, Richard and Betty were members of the Community Grange in Sumnerville, MI. And she worked as a volunteer at the polling station at Oak Manor School in Niles for many elections.

Betty’s creative talents as a seamstress and dressmaker morphed into Betty Miller Draperies, a career which kept her busy for many years. Among her many projects, she designed, sewed and, with her husband’s help, installed the drapes and valances for the Morris Inn on the campus of the University of Notre Dame.

When she was done being a full-time entrepreneur, she was offered a job at the Brandywine School Corporation, where she developed a reputation of being the bright-eyed, eager person who could take any problem and master it. She helped transition the office from typewriters to the, then, ground-breaking DOS computers complete with floppy drives and dot-matrix printers. She learned how to write grant proposals for the school system and did so well that even after she retired, they offered to rehire her on a work-from-home basis. Needless to say, she took them up on their offer.

Betty attended several seminars on investing before she became a self-taught portfolio manager. Even past her 91st birthday she watched the business channel to gather info she could use in her trading. She loved the astonishment she caused when informing people that she not only knew how to use the internet, but that her family came to her for financial advice.

A true “Renaissance” woman, Betty was a painter, a poet and a traveler – she and husband Richard visited almost every state in the continental U.S. accessible by car.

Betty’s professional life was matched by a rich personal life shared with her husband of 58 years, until he passed in 2005. She is survived by her daughters, Sharon and Wendy, and her grandchildren, John, Zoanne and Zara; devoted friends and a host of people whose lives she touched even if they only knew her for a short time. And while we have lost our kind, strong, independent, happy mother and grandmother, Betty is only off on another adventure, this time to the arms of her Savior, where she is sure to look at Him bright-eyed and eager for whatever He has in store for her.

Those wishing to honor Betty through donations are asked to consider Hillsdale College, 33 E. College Street, Hillsdale, MI  49242 or give online at https://www.hillsdale.edu/support/ways-to-give/.

A time of visitation will be held on Friday, October 11, 2019 from 5:00 p.m. until 7:00 p.m. at Brown Funeral Home in Niles. In keeping with Betty’s wishes a private family graveside service will be held at Silverbrook Cemetery.

To send flowers to the family or plant a tree in memory of Betty Miller, please visit Tribute Store
Friday
11
October

Share Your Memory of
Betty
Upload Your Memory View All Memories
Be the first to upload a memory!
Share A Memory
Send Flowers