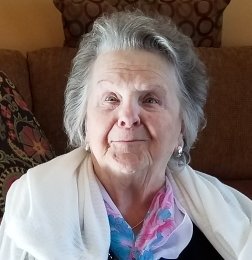 She was born on February 12, 1935 in Paw Paw, Michigan to the late Joseph and Catherine (Gozdecki) Kowalski.  Theresa grew up with six siblings on her parent’s farm. She married John Galus in 1953 and lived in Hammond, Indiana for over twenty years, until his passing in 1972.  In 1978 she married John “Elmo” Day and moved to Baroda, Michigan, he passed in 2014.

Theresa was always busy in the kitchen creating wonderful dinners & desserts.  She enjoyed Black Bear hunting in the U.P. and another “hunt” she enjoyed was for mushrooms. Theresa worked for a short time at Tabor Hill Winery and loved spending time with her family.  While at home she developed an interest in watching wrestling and her favorite was, of course, Roman Reigns. In the last several years and in declining health, she was cared for at home by her granddaughter LaDonna, her husband Charley and their children.

Memories of Theresa may be left for her family at www.BrownFuneralHomeNiles.com.

Arrangements have been entrusted to Brown Funeral Home, Niles.

Share Your Memory of
Theresa
Upload Your Memory View All Memories
Be the first to upload a memory!
Share A Memory
Plant a Tree